Pay Per Use vs Unlimited Plan: Find the Cheapest Web based Dialer 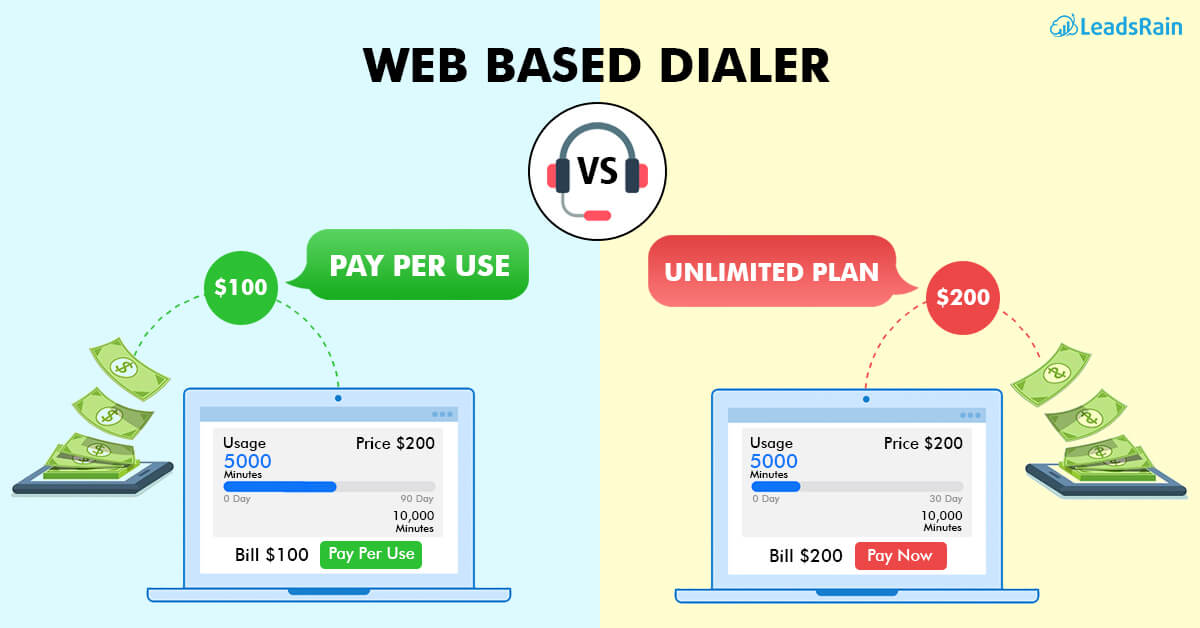 Buy only what you NEED and not what you WANT.

Remember those all you can eat buffets you visited as a kid?

I used to chow down an ungodly amount of food at those buffets. I remember

So just for old time sake, I went to one of the all-you-can-eat fast food joint 2 blocks down the lane. And as you would have guessed it was 2 blocks long walk of shame back home.

I paid at least 3 times more for something that I could have ordered for few bucks!

Not to mention, they STILL don’t include drinks in the buffet! (It was a stress on my wallet back then, and guess what it’s still a strain today!)

I was fooled by a business model, you don’t have to!

Going with an “Unlimited Calling Plan” is a lot like going to an all you can eat fast food joint, you overestimate your ability to eat!

So is it truly unlimited dialing?

To be honest, yes, but that’s not the real question you should be asking yourself.

The question you should be asking is “Will I be able to utilize the unlimited calling fully?”

The answer to that is a big NO.

Now the minutes depend on a lot of things that the plan does not account for,

Hence, the call time of an agent may vary greatly depending on the day and the contact centre. Paying a fixed rate for something that varies so greatly is counter productive and not cost-effective.

An average unlimited plan charges a monthly fee of $199 per agent.

The cost incurred per day of an agent with an unlimited calling plan equals to $9.05*.

Whereas for pay per use, it can vary from 0 to $5. Our users mostly see an average cost incurred of $3-4 per agent per day.

Why Pay Per Use benefits you more than an Unlimited Plan.

Convenience and Customization. These two are the biggest benefit a consumer gains from the Pay per Use Model, you can customize your usage and the cost incurred will get adjusted accordingly.

– You do not bear empty or no-calling days

All pour pay per use plan comes with a validity of three months and not month, hence you do have to bear the cost in the offseason.

With Unlimited Plan, Cost is going to increase with the addition of every single agent, whereas with Pay per Use, you only need to top-up your existing plan. The cost incurred is not charged flat on the agents, but the usage

Pay As You Go bulk dialing plans allow you to BOTH scale up AND scale down without wasting resources. Have more agents than you expected, add an agent-free of cost, top up your minutes once they are used up. Want to reduce the number of agents? Just remove the agents, top-up when the remaining agents use up the remaining minutes. Unlike unlimited plans, where scaling down usually means bearing the cost of agents that are left.

Remember the drinks at all you can eat buffet?

Similarly, many unlimited service providers charge you extra for something that should be fundamental, like round the clock support, inbound channels, and campaign reports.

Can Unlimited Calling be Ever Be Cost-Effective than Pay Per Use? 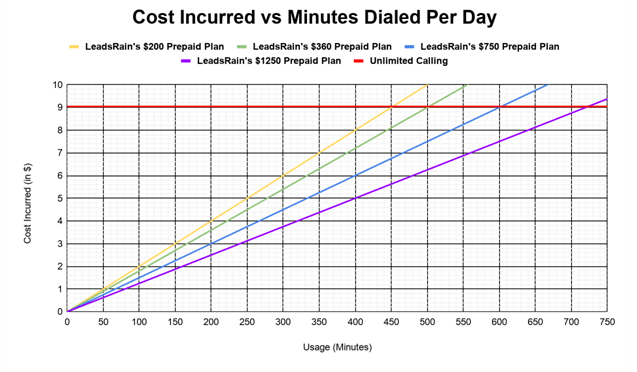 The above graph shows the cost incurred as the minutes used,  for example, you pay $1 (Vertical Axis) for every 50 minutes of usage. (Horizontal Axis)

The above graph works as a comparison between various plans of LeadsRain’s Cloud-Based Predictive Dialer and also the flat rate charged per agent in the unlimited plans.

From the graph, it can be deduced that you would have to use at least 450 minutes daily per agent for an unlimited plan to be a better option than LeadsRain’s $200 plan.

For our flagship plan of $1250, the break-even point is at even higher volume, a whopping 720 minutes or 12 hours! Which is next to impossible for an agent in a normal case.

Running a contact centre is not equal to dining at an all you can eat buffet. You cannot ignore your gut and the numbers. You must estimate your usage and calculate the cost incurred for your usage. Unlimited Plans, in fact, do start making sense at high call volume, hence having an estimated usage can help you figure out what plan you should opt.

Why Insurance Company Should Integrate CRM with Call Centre Software?

The insurance industry is quite complicated, and agencies have to invest in customer service to build customer loyalty and differentiate their offerings. Like many other…

Cold calling in the real estate sector is a challenging lead-generation technique. Some agents claim it’s not worth the stress or annoyance, but seasoned professionals…